This neighborhood (Twin Lakes in Federal Way) is just covered with tiny baby dragonflies. Has been for two weeks now. It amazes me that there are so many… and you can watch the birds just dive in and pluck them from the sky. It’s gotten me wondering about the biomass signature here… what did it look like when we didn’t displace their habitat? I know there are places on the mountain still where the pre-industrial, natural world is just going to town. I can’t wait to get a glimpse of that!

Graham had her portraits done this morning for her recital. The recital is “Lands of the Sun” and Graham’s class is doing “Cuban Pete.” They’re quite adorable, even though the hot pink, sequined costumes are heinous! LOL

Weeds can be pretty. They really can. We've got some weird little butter-yellow cup shaped flowers in the back yard and they're simply lovely. As usual, staring out my windows in the evening makes me feel content and safe. I love the play of the light in the sky; the huge, tall trees everywhere; the feeling of being nestled in. It's a nice place to live.

Yesterday we went to the pediatrician for D and G. We left N with ~A~ to play with three out of her four littles (who are we kidding? he loves ~A~ ) and headed to the dr. Now, Perfect has four bandaids on his legs. After five months I finally allowed them to start his immunizations. He was such a big boy until shot #4. Then he cried, very angry. But we gave him a tookie (his first tookie!) back at ~A~s house. Perfect is 18 pounds 13 ounces. 5 months. Eater! All better.

Cept for my ranting:

Abusers!!! I hate seeing him with bandaids. Baby #3 and I still wanna cry!

G is 41 pounds and 75% in the height percentiles. She's my tall willow. She was a show OFF on her vision and hearing tests and was very not amused during her blood draw. I don't know what she thought I meant when I said "blood draw" and "they're going to take blood out of your arm" but she was adamant with me after the fact that her idea did not include the "shot" she received.

The draw is for her food allergy RAST. I am hoping and praying to God that her peanut allergy has gone. If you pray for anything, please pray for my grace so that I can handle whatever the news is appropriately. 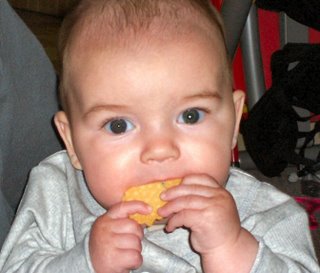 At A's house we gave Perfect his first teething cookie. Like every other food item to which he has been exposed, he adapted immediately and well. He ended up with two arrowroot cookies, which to experienced Mommies means, he ingested about half of one. The kids love it out there and I definitely enjoy being in a yard again. This little spit of grass we have fenced in back here does NOT make the cut.

I would say, hey look how fertile I am wooohoo a baby making machine BUT Kimbolina DOESN'T GET HERS FOR A YEAR OR SO AND SHE'S THE BABYMAKER!!!!!!!

At least I know why I was so damned cranky this week.
Posted by Unknown at Friday, June 17, 2005 No comments:

There is a place in Auburn where you can see the sky, wide open until Mt. Rainier. When you come out of Peasley Canyon and onto 15th Ave Rainier is at 2 o clock and the whole sky swirls above you. This is the intersection of highways 162, 167, and 18 and you can see for miles and miles. It’s great, because when you’re coming up from Puyallup on 167 you can look around and accurately determine what the weather is like in cities as far away as 30 miles. The weather here is sooooo dynamic and this view of Mt. Rainier to the east lets you watch the phenomenon that allows the temperature here to be so mild. You can watch the oceanic clouds pouring in from the West, hitting the Cascades and swirling back, keeping the moisture here. It’s beautiful. Amazing.

Leave it to Pugetopolis to have even an interstate snarl provide an ooh-aah moment.

Laundry. My God, the laundry. At least right now it is laundry hill instead of Laundry Mountain. In all honesty however, that’s only because the kids have been pulling their clean clothes out of the folded-laundry baskets. Poor fings. I need to put it away!!!!!!!
Posted by Unknown at Thursday, June 16, 2005 No comments:

Nothing like taking the kids to the park motivates me to do laundry. Or scrub the shower. It looks so relaxing; all those Moms lazing about in the sun, watching their beloveds running and playing with others' beloveds. But ya know-- it's not all that relaxing. You have to stay awake. You have to be alert. And if you forgot the water bottles or the sunscreen, somebody's toast.

I love taking my kids to the park. Really I do. And it's good for everybody. But I do appreciate the fact that they will leave when it's time to go! :)
Posted by Unknown at Wednesday, June 15, 2005 No comments:

Life as we know it

As we move closer to actually possibly moving into this house, I am finding myself dreaming of it constantly. The dreams run the gamut from pleasant, homey, sunshine streaming, dinner steaming dreams to the seller getting another higher offer on the house at the eleventh hour. I do believe we’re doing what we have to do but the notion to me of spending 1800.00 a month on HOUSING makes me want to violently toss my cookies. I can really think of other uses for that money. We need to be financially disciplined—MYSELF primarily—to make this work. I hope to God we can pull this off and refi very quickly.

D fell off the bed yesterday for the first time. I was not amused, but neither was he. I hate that horrible pain scream they make, and the crying without sound. He was so shocked. We both got over it.

Yesterday afternoon took the kids to Wright Park in Tacoma. It was a ridiculously glorious day—perfect June day—despite being chilly, which I am certainly unaccustomed to at this point in the year. The skies were blue and dotted with fluffy white clouds, and the wind played music with the leaves of the trees through the park.

Squirrels here are very odd. They are much tamer than in SC, and will be right on the playground where the kids are raising hell. Yesterday evening, one was in our back yard SUNNING ITSELF on the privacy fence. They’ve got more personality here, that’s for sure.

Going on day ten without a van. It’s in the shop for transmission work. AGAIN. I am tired of missing chiro appts. Had to reschedule G’s well child visit and D still hasn’t had immunizations. Used P’s car to go to park yesterday but by the time I got it from him there were no more available times with the Pediatrician.
Posted by Unknown at Tuesday, June 14, 2005 No comments:

Sap Alert-- Perfect Douginess Update This morning he woke, next to me in bed of course, and smiled at me.
He smiled, then said "Muh Muh!"

G’s birthday was a cute little success. She’s so adorable. Five years old. I can hardly believe that. But she’s always amazing me so I don’t’ know why that should even phase me at this point. She wanted a “dance party” and asked for ABBA for her soundtrack. We got her Thomas decorations and a Thomas cake and moved all the furniture in the living room back against the walls. We covered the floor with balloons and set up the surround sound… and when the guests arrived she took them to her room. LOL

She hijacked her own party! BIG GIRL!

I find myself daydreaming almost constantly about the house we’re trying to finance. It’s really small (1600 sq feet) but in a perfect location. I have to back myself off from my tangent of “succeed at all costs.” I am dedicated to helping us attain our life goals and being house poor is not one of them. Still, I really want to own our home. Especially here, it is a completely solid investment.

The boys are sleeping in our bed right now. It’s 8 am and all the children are still asleep. P is in Spokane on a business trip and things just go on a different rhythm when he is out of town. I miss him when he’s gone, but not when it concerns bedtime and the children. They abuse him mightily and we all pay for it!
Posted by Unknown at Tuesday, June 07, 2005 No comments: